Could This Old West Gun Fighting Secret Save Your Life? 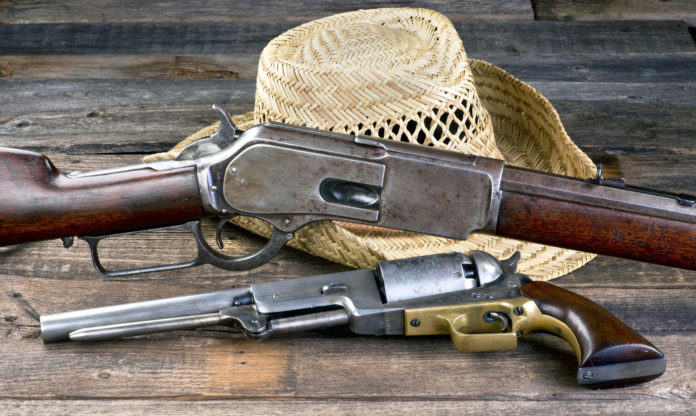 I don’t know about you, but I grew up dreaming of being a cowboy. I saw The Lone Ranger on television, and I thought riding a horse and carrying a revolver and catching bad guys was the greatest thing in the world. That is, until I learned that I’m not really a fan of desert heat, which seemed to be the only place that The Lone Ranger ever lived.

So, while that dream was shattered as a young child, a fascination with the old west and with cowboys brings some good information to you. And what is this good information? A writer going by Pat B explains says the primary firearm secret that we can learn from the old west is to pair our rifle and our handgun. They write,

The primary advantage of this philosophy is that you need to stock less ammo if both your main weapons eat the same thing. It also makes reloading on the fly more convenient, quicker, and less confusing. You can feed both weapons from a single cartridge belt, and you can load either weapon without looking down to see what you are grabbing. This is a big bonus in a high-stress situation.

Another benefit is that pistol caliber ammo is generally more compact than rifle cartridges, so you can fit more in less space. Firing the same caliber ammo through the longer barrel of a rifle or carbine gives it more juice. (Translated: greater muzzle velocity, greater terminal energy, greater “Stopping Power,” and greater effective range and accuracy). All this leads to a huge advantage in terms of effective use of ammo supplies. These gun fighting secrets are as manifest in packing a 21st century get home bag as they were in packing for a 19th-century cattle drive.

Also, reloading quicker (because you don’t have to figure out which ammo to put into the firearm in your hands) means that you can respond more quickly, and, sometimes, time of response is the difference between life and death.

So, is pairing your rifle and your handgun a simple concept? Yes, but like so many sensible ideas from the past, it’s not a concept widely taught or known. But now that you know it, you may want to go ahead and do it.