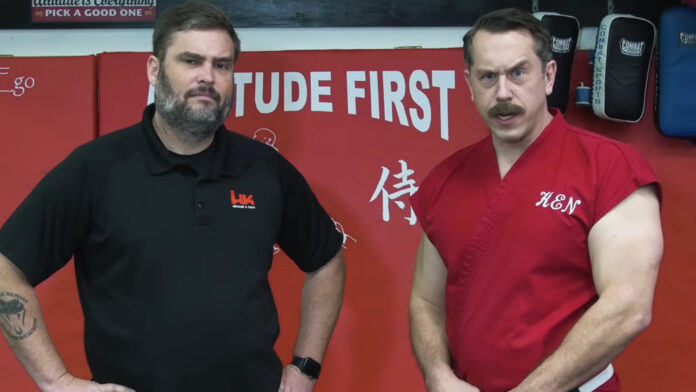 Everyone who carries concealed has their favorite carry position. Some people like the 3:00 position (right hip). Others prefer the 4:00 position (just behind the right hip). Still others like the small of the back carry position or the cross position (carrying at 10:00, if you draw right handed). And, of course, there are other methods of carry that don’t attach the firearm to your belt, like shoulder holsters, for example.

One of the favorites that many people outside of the concealed carry world don’t know about is the appendix carry position which is typically at a 1:00 position (assuming that 12:00 is right in front at the middle of your body) and concealed.

You may be able to come up with other reasons in support of appendix carry, but a guy going by the name of Master Ken is not an advocate of concealed carry. You can see the video that Correla and Master Ken did in Phoenix, Arizona about the subject below (warning: occasional off-color humor is in the video).

Now, in case it wasn’t already clear, Master Ken does humorous videos around different martial arts topics, in this case, appendix carry for firearms, and his fictional martial art is Ameri-Do-Te. So, of course, Master Ken’s arguments against appendix carry are almost completely ridiculous and said for humor sake.

Having said that, I had a good laugh, as I’m sure that he intended, and I hope that you did, too.

Now, be sure to use real (as in, not Master Ken’s) firearms training and practice safely and often.