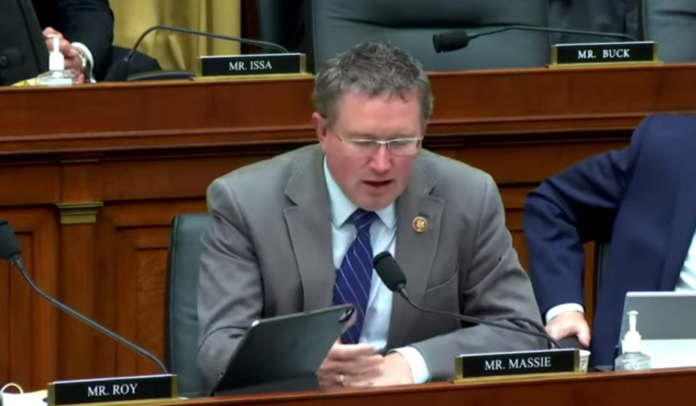 Let’s shoot straight here: Most members of Congress, regardless of which party they are members of, have never read the Constitution. Of the tiny few that have, almost none of them care what the Constitution says. To them, it’s only something to call upon to get people fired up to vote for them and to use as a bludgeon if they can, somehow, use it to get their way over someone else in Congress.

The amount of ignorance among our elected officials is beyond disgusting.

There are a very (very) few (you can probably count them all on one hand) in Congress who take their oath of office to uphold the Constitution seriously, though, and we’re talking about one of those statesmen today because he recently made a move that, once you read it, you know will make the Biden administration spitting mad. It made me proud.

We’re talking about Kentucky Representative Thomas Massie, who, if you’ve read this site for any amount of time, you know is a serious supporter of the Second Amendment (here is a personal favorite story about him that will give you a chuckle). So, what did, Massie do? Here are details from a press release from Massie’s office:

“Gun-free zones are ineffective and make our schools less safe. Since 1950, 98 percent of mass public shootings have occurred in places where citizens are banned from having guns,” Rep. Massie said. “Banks, churches, sports stadiums, and many of my colleagues in Congress are protected with firearms. Yet children inside the classroom are too frequently left vulnerable.”

“The only thing gun-free zones do is disarm law-abiding citizens and take away their ability to protect themselves and others. We shouldn’t leave our most vulnerable – our children – in an unsafe environment like gun-free zones where acts of violence cannot be stopped,” Rep. Jeff Duncan (R-SC) said.

You know that everyone in the Biden White House was gnashing their teeth about this bill. It’s just warms my heart to think of it.

And Massie is absolutely right, gun-free zones don’t save lives. They make people sitting targets, and with most schools being gun-free zones, is it any wonder that so many mass shootings happen on school campuses?

I’m just going to say it: I wish that the Representative from my area (I can’t say they actually represent my interests) cared about the Constitution, including the Second Amendment, as much as Thomas Massie does. He’s the kind of representative that the American people deserve instead of what so many of us have to deal with.